We visited this hotel, we were tired and worn out it was about 9:30pm and we needed to find a room.
We stopped at a Comfort Inn… I know they don’t have the best ratings but they were the only hotel with a room that was under 300 dollars and we were only staying until morning so we thought, Ok what the hell!

So We arrive and the nice lady said we only have a king size bed but there’s a jacuzzi in the room. My first thought was that’s ok, I am tired and if it’s clean and the room’s clean, I’ll be fine.

So we get to the room and unpack and this is what we see! 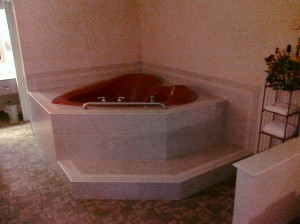 YIKES!!! I have only seen these in the movies and I know what they do in those tubs, so I did not use that.

Oh well, so we went to dinner and it was fine and on the way back the pool was closed BUT there was a giant drinking party going. As we passed the party a guy said “Hey man we have beer! Come Party!” There must have been fifty people drunk and hanging out! I took this as a bad sign and boy was I right.

About 1am in the morning they all started to their rooms and the parties and noise started. The screaming and drunkenness was way too much. Finally a few hours later the cops were called… OMG! I was waiting for the door to be kicked in and a “Whats going on in here!”

So needless to say we didn’t get any sleep, we missed our morning appointment.

We had gotten to the hotel late and not really looked around, we were too tired. In the morning we got a good look at where we stayed. Dirty. There was a baggie under a table, used for who-knows-what, the shower was full of mold and mildew, the tables and window sill were covered in dust and had dead bugs. YUCK! I’m glad we always bring our own pillows and covers – the sheets and pillows they provided were dirty!

on check out it was just the same lady – I don’t think she had gone home or taken a bath! She gave us the “Sorry” as I described the night. I asked for a manager and she said there wasn’t one there and I asked if he had an email and she replied “Oh, he doesn’t check emails.” She scribbled his name on a piece of paper and that is what we got…

That’s just wrong! So you want to know what and where not to go? We were at the Comfort Inn in Onley Virginia I wouldn’t give it two stars if I were asked to rate the place.