Before I left town to fly to LA, California, I talked with many people and when they found out that I was going to sail a boat from LA to Mexico and head south from there many were like “What?!?!” and “OMG don’t go to Mexico, you won’t make it out of there alive! You know they are killing people there… Americans were found dead with their heads chopped off!!!” 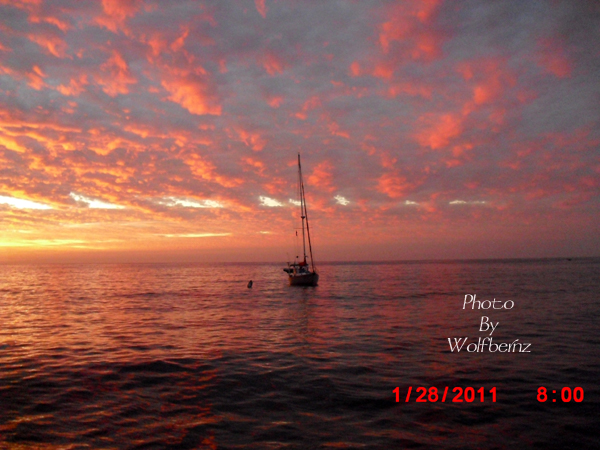 I left on Black Friday and I have been in Mexico for some time now. We sailed from Catalina island down the Baja coast and stopped at Cabo San Lucas for the holidays. Then into the Sea of Cortez and across to the mainland to a city called Mazatlan. Then down the Sea of Cortez to a few small towns where we could anchor out in the small protected cove. From there we have sailed to a nice place at the north end of Bandaras Bay called Punta de Mita (a very cool surf spot I might add.)

Then we traveled more into the bay just north of Puerto Vallarta into a Yacht club called Marina Riveria Nayarit in La Cruz. We have been using La Cruz as a home base and have sailed the Banderas Bay to many other places – some that can only be gotten to by boat (very cool and native Mexico).

I have found that on my traveling vacation that Mexico has been given a bad rap. I have not met one person here that has been rude or even slightly out of line. Sure you will see the Mexican police and the military with their big guns and at first it looks kinda scary, but you know, I would be more afraid to walk down the streets of downtown Baltimore or LA than I do here. I have traveled roads to places in Mexico that most would not dare only to find the coolest town of people one could ever meet.

This is a country full of very artistic people and they are happy. I have never seen a bunch of people who have so little be so happy with what they have. The family values here are very high, not like you would see elsewhere. I have yet to see any violence of any kind. Nothing even close to what you watch on your TV every night in the United States. I am not scared to walk the streets here at night.

One day I decided to take the bus to the old town of Puerto Vallarta and on my way I saw many young men get up and give their seat to an elderly person so they could sit down and not have to stand and be thrown around on the bus. I saw one young Mexican man say to an American women, “Let me help you with your groceries while you get on the bus and find a seat.” Does this sound like the place the media has so hyped up for us Americans not to visit?

So far I have enjoyed my stay here in Mexico we will be leaving almost too soon and heading south and I must say I have thoroughly enjoyed Mexico and all of it’s beauty and the wonderful people here.