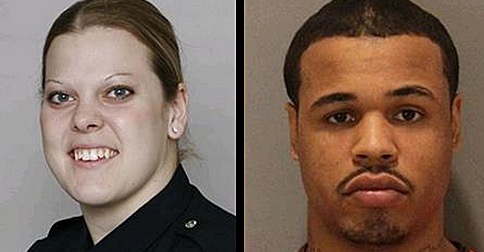 Should we all run to Walmart and steel some TV’s and booze, lol.

Well, like the poor guy that needed toilet paper and his corner store had been looted and when he got to Walmart he saw it had been looted, he had to become a looter too cause the stores were closed. When a man needs toilet paper, well let’s just give him the paper ok?

Seriously why is life this way? The media is told by the Government to get black issues fired up, while at the same time the government can train our national guard for urban warfare on US soil.

Hmm that seemed to work well, getting people stirred up about race issues and then calling for the police and military to “Back off and Let the Rioters Riot” Basically, lets see how far they will go. Looks like a good way to figure out what you are up against while doing training on Urban warfare in out areas. So let’s do it on a bigger scale, like about 22 states!!!

On Wednesday, Omaha Police Officer Kerrie Orozco, 29, was gunned down by a black thug only hours before she was slated to go on maternity leave. A team of officers including Orozco were reportedly attempting to serve a felony arrest warrant to fugitive thug Marcus D. Wheeler when he began firing at them.

Orozco was hit, and though paramedics rushed to the scene and performed CPR on her, she sadly did not make it and died around 1 pm at a nearby hospital. Wheeler, a convicted felon and known gang member, was also hit, but he managed to survive and will get to see his family again. The same cannot be said for Officer Kerrie Orozco, who is survived by her husband and three children.

What happened to Orozco is beyond sickening. She knew the risks, but most certainly did not deserve to die like this. Yet the city of Omaha continues to function, businesses continue to run smoothly and citizens continue to act with respect, decency and sanity.

Unlike in Baltimore, where residents destroyed hundreds of businesses after a black man died in police custody, and unlike in Ferguson, where residents practically torched their city after an officer was acquitted for justifiably shooting a black thug, in Omaha citizens apparently trust the justice system to get the job done right.

Furthermore, thereâ€™s something missing from Omaha that was present in both Baltimore and Ferguson â€” the liberal mainstream media.

In both Baltimore and Ferguson, the liberal media rushed to the scene to incite racial tension.

It goes without saying that the leftist media cares very little about upstanding white officers killed by black thugs.

It doesnâ€™t fit their race-baiting narrative, and the truth is that the only thing liberal media charlatans really care about is propping up their narrative.